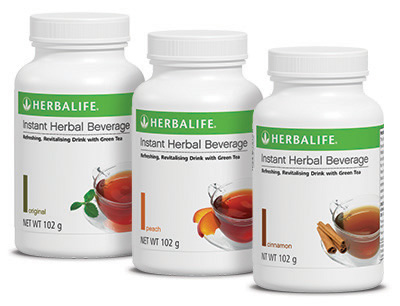 The antioxidant properties of green tea have been well known for some time. Now, new evidence shows the active ingredient - catechin - may also have a beneficial effect on metabolism. Researchers conducted a series of studies and found that green tea drinkers lost more weight than those who didn't, suggesting that catechins may improve fat oxidation and thermogenesis, your body's production of energy, or heat, from digestion.

Herbalife's Instant Herbal Beverage is a delicious and refreshing green tea mix, which can be served either hot or cold. Just mix 1/4 to 1/2 teaspoon of the powder with hot or cold water and stir. It's now available in three flavours - original (lemon), peach and cinnamon. The peach and cinnamon flavoured teas are sweetened with a small amount of Stevia. The original flavour contains no sweetener, but is the most popular of the three flavours.

First let's talk about green tea and the fact that in hundreds of scientific publications through clinical trials it has been shown to be very beneficial in building the immune system through its abundance of antioxidants. The Herbalife green tea products contain three different strains known for high antioxidant content as well as thermogenic properties which cause the body to burn calories and a nice natural addition of caffeine as a healthy substitute for coffee and sodas all in all a great low-calorie substitute if you're looking for a healthy a alternative. (Christopher Reese, Senior Executive Heath & Nutrition Coach)